by Tracey-Jane | Letter from Malawi | 0 comments

This is a letter from my friend Marian Kearney, who is an amazing and inspirational woman I’ve worked with. She’s now in retirement and filling her time with sharing her love, talents and inspiration to those less fortunate than herself. In sharing her letters, I hope that others will learn more about how much little things can make big changes in our world. 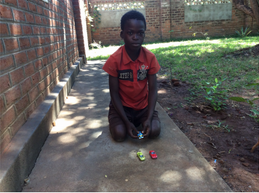 I can hardly believe that within a few days my month out here will be ending and I will spend the next few days saying goodbye to so many people including Hannif my self appointed bodyguard. He is 10 years old and not attending school even though primary education is free of charge.

He tells me that it is because he doesn’t have any school uniform. I don’t know why not, as often our conversation with each other is lost in translation. We are at least having lots of informal English lessons most days. Here he is playing with some of the little cars I brought out; next time will bring plenty more of them.

Talking about English, I would first of all suggest that Enid and Jill sit down before reading further, as this week I have spent some days in the secondary school teaching English. But please don’t be too alarmed as I stuck to what I definitely knew. My teaching group was the whole of Form 1, two classes brought together each day to hear my pearls of wisdom. In that group were more than 100 students aged between 13 and 17. 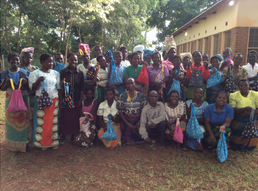 Here in Malawi the system is that if a child doesn’t pass his / her end of year exams they stay down a year resulting in age groups in any given form being quite varied. I also did some after school sessions with Form 4; they were up to 20 years of age, and they told me that in their year group of 34 only 10 were girls.

Apparently girls drop out of school big time from about the age of 14, with most of them getting “married” I understand that the government is trying to make underage relationships illegal but is fighting against cultural norms. Most marriages in Malawi are common law with the local chief granting permission for the marriage to take place but with no legal standing.

In the first email I told you of my plan to work with girls and women to create feminine hygiene kits, and this photo 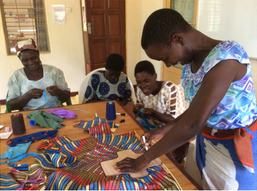 shows some of the women happily posing with their completed kits. Making the kits was possible for a number of reasons, firstly the practical support from the Stitch-in-Time group in Arnside and the ladies from Kendal Catholic Church who prepared a number of kits for me to bring over here.

Secondly, generous donations from friends allowed me to buy a sewing machine and accessories as well as some beautiful colourful fabric and the services of a local tailor ( the only man in the photo). The project took several
stages, firstly meeting with the women, (under the mango tree), to assess need and willingness to participate, going into Zomba with the tailor to buy a sewing machine, fabric and other accessories and then holding a number of making sessions which were great fun with up to 33 of us at any one time working together in the training room which measures only about 15’x 12′. One of the interesting factors I hadn’t considered was the need to teach the women how to draw around a template, many of them are illiterate and have no experience whatsoever of holding a pen. The young lady in this photo just loved doing it . The women were all members of a choir and they sang as they sewed, melodious songs and beautiful harmonies, it was wonderful. I have a video of some of their songs often with a little dance thrown in as well.

As part of this project, I also spent time with three other organisations showing them how to make the kits and leaving samples with them – Catherine, the lifeskills teacher at the local secondary school, Caroline who is on a two year contract in Blantyre, supporting the work of the Christian Missionary Society and Rachael who is working in conservation but volunteering with the Malawi Women’s Empowerment Group. The message is spreading and I really hope that these kits will result in keeping a lot more girls and young women in school and work all through each and every month.

Will send a final note as I return.

Marian is travelling and working with Network for a Better World. N4BW is particularly keen on not developing dependency but is committed to working in partnership with other organisations to work as a catalyst in getting the Sitima villagers activated and in a better position to ensure positive and sustainable livelihoods. This is going to take time and effort. Any support you can offer, please contact Network for a Better World directly.

This site uses Akismet to reduce spam. Learn how your comment data is processed.